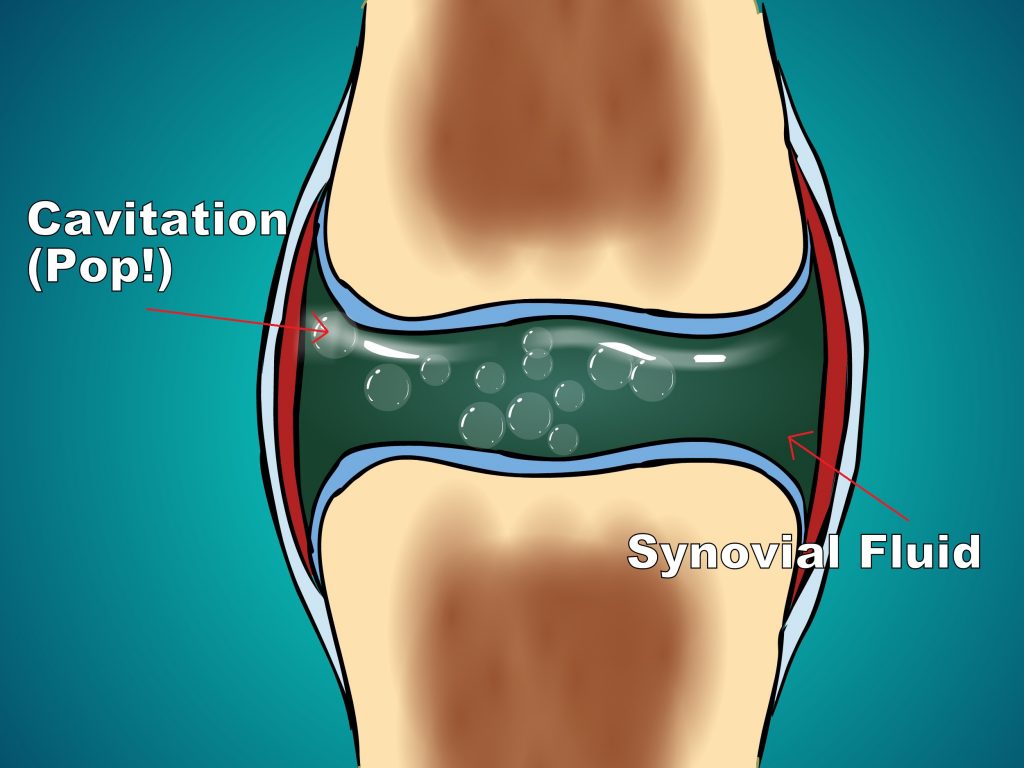 It’s not uncommon and really not surprising that some people would be afraid to be adjusted. It’s different and unfamiliar and you’re trusting someone to make a rapid movement to your spine which usually creates a loud crack. How could someone possibly remain calm with this going on? The truth is, most adjustments and very comfortable and the relief that follows typically makes up for any uneasiness. We actually find in Madrid Health that most people are more unnerved by the “pop” than anything else. Again, for some this can be something they’re not used to and the thoughts of bone colliding against bone enter their thoughts.

Before we get into why you hear a pop during the adjustment, we first have to talk about what it is we are adjusting. Chiropractors adjust and correct subluxations. Many explain this as a misaligned bone, and there is some truth to that, but it is more accurate and easier to understand as a joint that has become fixated. Essentially, it has lost its normal biomechanical function and full range of motion; it’s a stuck joint.

Stuck joints can cause a quite a number of issues for the body. The first most obvious is a lack of motion: stiffness, feeling locked up, or the inability to turn one’s head or stand up straight. A joint not moving properly can also cause pain, inflammation and loss of function. And then there is the neurological component. Subluxations often irritate the nerves as they branch off the spinal cord and exit the spine. This can lead to dysfunction within the nervous system itself and the communication it accommodates between the brain and body. Left uncorrected, especially for a long period of time (months, years, decades), subluxations can cumulatively disrupt the function of the body and its various systems, leaving the body out of sorts.

When we detect a subluxation, we correct it with a specific chiropractic adjustment. There are several techniques chiropractors use to do this. In our office we use the Gonstead Method, a very specific, gentle technique to correct the spine.

So what is the “pop” that is so unnerving to some people. To begin with, it’s not “bones cracking”. Chiropractors do nothing with the bone except contact it. When we make an adjustment the joint opens up slightly. When this occurs it is like pulling apart two surfaces that have been stuck together by a sticky substance and when they release, you hear a pop.

It is called a cavitation, and it’s the release of nitrous oxide gas within the joint that makes the popping sound. The joints of the spine are called synovial joints and they produce a fluid called synovial fluid that lubricates the joint and nourishes it. The production of this fluid produces gasses – oxygen, nitrogen and CO2. When a joint is gapped, the gas is quickly released and you hear a distinctive popping sound, similar to that of bubble wrap. Once an adjustment is made, the fluid re-lubricates the joint surfaces and normal motion is restored. On the other hand, if you don’t hear a pop during the adjustment it doesn’t mean a correction hasn’t been made. There are often times that the joint simply doesn’t need to open as much to make a correction and therefore doesn’t make a noise.

So, don’t be anxious the next time you visit Madrid Health, the relief you receive from an adjustment more than makes up for any nervousness you might have had a second earlier. We have many people that come in for treatment that feel the same way, but we find that the best way to ease someone’s fears of being adjusted just takes a few things: patience, understanding, sympathy, and most importantly, a simple explanation of what’s happening during an adjustment.